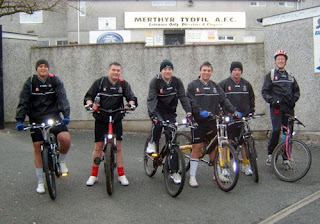 Chairman Mao said…
You are a little diamond, there are more ideas where that came from. Historic walks dressed in tudor costume is the latest, is it relevant to MTFC? Who cares!
31 July 2008 at 22:14

Suntan Sammy said…
I still think we should look into hiring the 'Waverly' for the away trip to Clevedon, gotta be done one year!