A cause for optimism?

By Chairman Mao - May 03, 2016
To be honest it's been a tedious season for me. Endless chatter about the new clubhouse. Delays. A different pre-match countdown to each game. The Grawen, The Park View, The Winchester and even the Express on one grim afternoon. You tend to forget how much of a routine watching the Martyrs becomes over the years, people have their own journey to Penydarren Park especially on a Saturday. A bag of cockles, the Morning Star and a Lucky 15 on the horses is my starting point but this campaign I've not had the Candac as a destination. True, I've had a few decent pints in the Winch, enjoyed the juke box in the Park View and fielded questions in the Grawen but it's not the same as the comfort of our own clubhouse. Have I mentioned the delays yet? The gallows humour that runs beneath the surface of every conversation in Merthyr emerged every weekend. The lack of information on the project a constant source of frustration to supporters who had bought into the fan-owned philosophy of Merthyr Town. Delays. Christmas came and went. I started drinking Lemonade much to the bemusement of the staff in the Park View. The team stumbled along, frustratingly inconsistent, capable of sparkling football one minute and conceding soft goals the next. The Cup and Trophy exits were disappointing, opportunities lost again. The Colin the Monk Stand ideally placed to show our appreciation for players and officials as they trooped off to temporary cabins. Chances grasped to dispel myths from keyboard warriors. Did you recognise yourself from their words? No? Me neither. It's not wrong to be loud, funny and passionate from the terraces. It's what we do well. Though cowards flinch and traitors sneer we'll keep our flags flying here. Deck chairs on the away end, beach balls, Hawaiian leis and some quality buffoonery. Hitchin fans get it. A community project to be proud of. UEFA got it. So what would you say was the single most popular reason to visit PP this season? For me, it was cob & chips. A little bit of curry too if I was feeling adventurous. That's it really. Often I'd wolf down the carbohydrates and wonder how long was left in the match, 80 minutes, really? Mr Diflas that's me. At least I made one away game this season which is pretty rubbish let's be honest. Biggleswade was great though, noisy away support, a brilliant win and a police intervention on the M4. What's not to like? I really need to do better next campaign. Get out a bit more. After Toulouse I may fancy the booze, a new clubhouse, it'll surely be different. It's open you know, April. There were delays. Back to old routines, old friends, Doom Bar, same old banter, nonsense and schemes. Full kit wanker day anyone? I think it'll be better in August, it will be won't it? Start afresh with amazing facilities, start anew with fresh hope, a Cup run, promotion, we can all dream. Maybe even a decent pre-season friendly or two to whet the appetite. It's not been all doom and gloom of course, in fact most of you probably enjoyed the season, all that Facebook banter, Prosser's beard and then some silverware. The League Cup, often derided but not to be dismissed not even when told to do so, will ensure that the 2015/16 season will be remembered for something more than building works, delays, rain and Spandau Ballet sing-alongs. It's true. A tidy achievement that shows that we have the players to compete in this division and that next term we could have a chance to challenge. There weren't many teams that impressed at PP, the four play off teams in particular were pretty ordinary to me. I'm getting a tad optimistic here, it'll wear off after a couple of pints of Hobby Horse in the Winchester next to the roaring fire (in August!) I'm sure. I am looking forward to the 2016/17 season though, it's been a nothing campaign for me this time around but I can see green shoots on the terraces at PP and I don't mean the weeds blocking the old toilet block on the away end either. A new fan culture seems to be coming through with a younger element, welcome additions to be sure, lads to take up the challenge of supporting the Martyrs in the face of the non-stop onslaught of TV football. There are reasons to be cheerful and I may allow myself to accept them, probably in July when Glamorgan are out of every competition and I'm desperate for cob & chips in a deckchair. 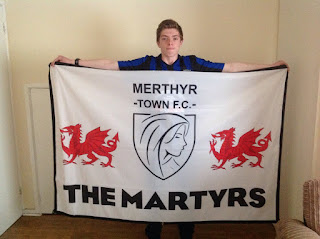 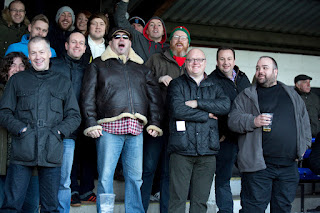