By Dr Obnoxious - April 14, 2017
The Monk is a curious fella, we’re distantly related through my missus I’ll have you know. He can be very loud, is by far the most intellectual member of Dial M, he’s the “must have as a team-mate” if there’s a pub quiz. His vocabulary is amazing. I often need to stop our conversations to ask “what does that word mean Col?”.  His ability to intersperse sentences with swear words is legendary too – so I will take this opportunity to warn you that you should never ever trust The Monk to organise travel for you. Just don’t. I will explain…..

Colin never saw any of the group games at the Euros, so when we drew Northern Ireland in the last 16 he was keen to get out there. He been hearing the stories of our campervan trip to Bordeaux for the group stages all week, so Colin wanted to get there and see what all the fuss was about.

So it was now Tuesday and the game was Saturday evening, my bosses (one at home and the one at work) had both given me the green light, so I left it with Colin to see what could be arranged. The flight situation was grim, but not as grim as some of the DMFM crew’s arrangements. I was not bussing it overnight – no chance.

Le Moine called and had found flights online for £200. They left Friday evening and got us back Sunday night. So half day was booked and we’d be set. There’d be a catch, the flights were from Birmingham, so no dramas (oooooh did I not see the future events) but we were flying with Lufthansa.. via Munich on the way out and Frankfurt on the way back. Given the option of going on a coach, we booked it. Hour later I had a room for two nights for £100. Colin would drive and pick me up from work at 1pm for the 5.45 flight. 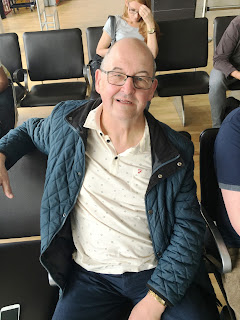 Friday came and a flurry of text from my travel companion had me on edge. The dogs had to be kennelled, food needed purchasing, etc. So he’s late, like only 30 minutes, but late none the less. We get a mile from work and he pulls into ASDA. “Que le la fuck Col?”… “Fuel” was the answer. 10 minutes later at the pumps (ASDA is rammed on Friday lunchtime, due to pensioners who got paid weekly years ago and got into the habit of shopping on a Friday…. My FRIDAY!!!!). “You’ve had all day to do this I’m muttering” – I’m sounding like Francis Begbie.

We hit the M5 around an hour later and it was gridlocked. I’m getting really edgy, as I can see the time oozing away. Colin’s keeping me fed with the variety of pastry products that are in the pocket of his suitcase. I pull out Pork Pies, Sausage Rolls, Crisps and as I dig in I find some paperwork. I pull this out and it’s the parking reservation. “I’ll chuck this in my phone’s sat nav then Col?

WHAT!!!!! This Car Park is in a place called Marston – google it… go to Maps. Not even close to fucking Birmingham. I mean we drove past the Airport, then drove and drove and drove. We drove for nearly 30 minutes and all the while I’m thinking, “We’ve got to come back this way and the traffic over that lane is worse than the traffic in our lane”. The Sat nav on my phone was brilliant, it took us through the NEC and some housing estate and we made up a good 10 minutes. The power of new technology, aye?

So we get to this Car Park and we can’t get in through the gates as there is a big orange bus blocking our way. I know instantly that this is the bus I should be on. I watch it drive off into the distance with my any hopes of sipping Heineken under the Eifel Tower the next day with it. It was less than an hour to wheels up.

We book in and I ask the driver how long before we leave, 20 minutes mate was not the answer I needed. “How about 10 mate, I really need to be on the plane to Paris as I need to see some oafish defender slice home a Gareth Bale cross”. (OK that last bit I made up). He was feeling my pain and he left in less than 10 minutes, then he went on some mystery trip which saved us a boat load of time – I could have kissed him. He got us to the airport, but now it was 5.15. Fortunately I checked us in online whilst on the bus. I have our electronic boarding passes sent by email to each of our phones. As I said technology is amazing. 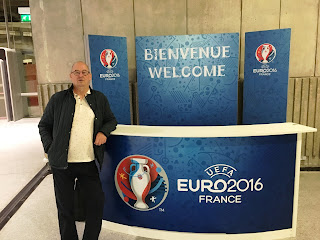 The next bit was a blur and the words ‘excuse me’ and ‘sorry’ were used a billion times. I was running through the airport with my over 60s mate trying to keep up. He’s out of breath and pleading for me to slow down or stop. I can’t, I’m scattering bodies all over the airport and I’m on a mission from God (aka Chris Coleman).

I keep looking at my phone, the minutes are flying by, "it’s the only fucking thing going to fly", I’m mattering through grimaced teeth. We get to security I strip down to just shorts, socks and t-shirt. The rest go in my ruck sack and I drop this in a tray, shove it up the ramp to the xray machine and walk through the metal detector. I grab my bag, slip on the Adidas and turn to leave. The Monk is being searched as he’s set the detector off. FFS. I’m debating whether to leave him, it’s gone half past and I can mentally hear the engines warming. I think better of it and appeal to security to hurry up. The guy finishes touching up The Monk and were off.

“Not so fast Nicotine!!!”….. Colin needs his case, he’s at the roller exit, it’s not there and he’s asking everyone if they have they seen it? Nothing!!! Colin has put his case on the rollers the other side of the metal detector, but half of it is on the edge of the frame - It's jammed – nobody has given a damn. I lost it, like proper lost it. Colin is the master of profanity, but even he learnt a few new insults to his vocabulary.

Another five minutes is wasted and we run the four hundred yards to the gate. We get there and I can see the dregs of the line boarding the plane. YES!!! I did a Tommy Steele kick to the right and we headed to the desk. “Boarding Passes?”. Honestly I’d looked at my phone only a minute ago to see how we were doing for time and in that 60 bloody seconds the battery had died. Technology – I hate you.

Some king size blagging was needed and after a few minutes the guy went to a computer and printed me off a boarding pass. We were the last people to board and the plane door nearly hit me on the arse as I went through it. I sat in my seat and nearly wept. It didn’t even bother me when the stewardess said there was no alcohol on board. I was high on adrenaline and scheming how I could get even with the Burnley Bastard over the next two days. 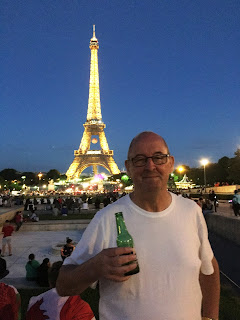 It was a great trip, the Saturday being my favourite day of the whole tournament. Drinking under the Eifel Tower all day with Colin, Bennett, Minty, Elis, Mackie, Maximus, Owain, Dai Webb and Moppy was amazing. The sun blasted her little heart out, we beat a stubborn Ulster team, and their many bigoted fans were very quiet on the train back into Paris, which pleased me no end. 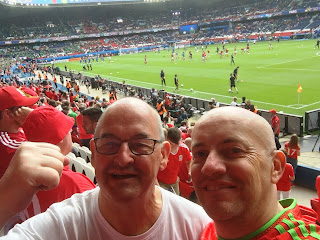 I made Colin walk back to our hotel that night - miles it was, it was so far that he sat on the road in protest and the following morning I made him rush all the way back to Charles DeGaulle airport for no other reason than I thought the bugger needed more exercise. We apparently had no time to stop for anything until we got to the gate; I then had breakfast and a pint. Small victories I thought - small victories.