By Dr Obnoxious - May 31, 2017
My Father was born in the late 1930's in Merthyr Tydfil. Like almost every other Merthyr boy he was football daft. He could name every FA Cup winning team of the 40's and 50's and was no mean player himself. Representing the Welsh Army team and being offered trials with Sheffield Wednesday and Aston Villa. It's a sign of how much times have changed that because was half way through a five year apprenticeship as an electrician it was decided his life would be better if he completed it as football was such a risky career move in those days. Finished in your 30's the dream would be to finish with enough to run a successful pub on the back of your name. My Father decided to stay in South Wales playing for Barry Town in the Welsh League. This also gave him time for do what he loved doing the most. Watching the game. And of all the games he watched (and he would watch any football he could) it was with the Martyrs his heart lay. 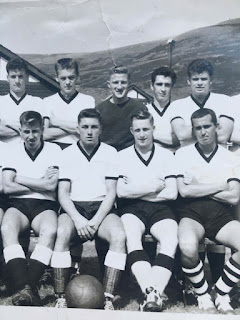 A young boy when Merthyr had the greatest non league team in the country he told me stories of 10 thousand home crowds at Penydarren Park and those glorious post war Welsh Cup wins. Hullett and Powell were players he'd tell me about. A Welsh Cup final in Swansea and packed stand full of Merthyr folk singing and waving to neighbours across red seats. For him it was everything seeing his beloved home town team winning cups.

The first match I ever went to was at Penydarren Park. An FA Cup replay against Chesham. I can remember my younger brother was in his arms and we were late. Parking at my Grandfathers house in Penyard we ran down the hill. He stopped suddenly. He could hear a crowd roar.
I think that's us boys. I think we've scored.
My younger brother was set down and the three of us went sprinting to the promenade desperate to get to the ground. We lost. I didn't care. I was giddy with the atmosphere that day. 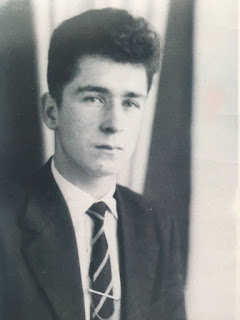 Brian's Fathers name was Gwyn. He was another Martyr. His brother was my Great Uncle David Owen. He was the chairman of the club in the 1960's. He'd often let me in for nothing as a boy. My and my brothers. He'd wink and wave us through. I can remember one Welsh Cup game against Swansea. Skinheads running back and forth past us. My Father tutting and telling one teen who came a bit close he'd put his boot up his arse. He never got that side of it. He'd often watch Merthyr, Cardiff or Swansea home. In the weeks before his passing he'd look for all the Welsh teams results. Wanted them all to win. Thought the rivalry 'daft'. He was a football man to his bones.

The great Lyn Jones team I'd probably say was the time in all his life that he enjoyed the most. In his late 40's then, not far off my age now, he'd travel home and away to games. He once drove me and my mates to Sutton for a game. Bollocking me for swinging on the stand rafters when Merthyr scored. He'd talk long into the night on how that team players. 4/2/4. Wingers pushed right up the pitch. Kevin Rogers with a sublime left foot. Andy Beattie dictating tempo. Two solid centre halves and goalie and of course Dai and Bob up front. They really were a joy to watch. He lapped it up. His beloved Merthyr the best team in non league football again? A joy to behold.

My Father went away with Merthyr and Wales in the late 40's and early 50's. At his funeral his childhood friends told me of trips to Hereford where it ended in pushing and shoving! The roared laughing telling me. Your Dad always in the middle rowing and arguing with the English. Oh I wish I had just five minutes to talk this through with him. The irony of all times I was told to 'calm down' when he was just the same. Haha! Beautiful to know though as it never leaves you. 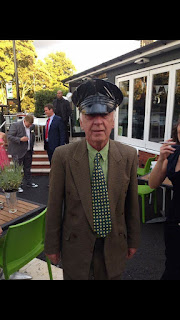 My Father loved the game of football. He loved Merthyr Town football club. He loves the fans the culture. In the last few weeks when he was bedridden he said to me that if he could do one more thing it would be to go to the match with his friends and then watch the results come in, pint in hand in the pub. That's what he wanted to do most. Tells you everything doesn't it? About what we do and what we have together. All of us watching and growing up in Merthyr. We're lucky to have it. We almost lost it once but enough people cared to keep it alive. The club is the beating heart of the town. It's what the people need more than anything. My Father loved it. And it loved him back. My Father was a Merthyr boy. My Father was a Martyr.