By Dr Obnoxious - June 28, 2017
My other team play in a monochrome kit too. The Oakland Raiders. The NFL team. I’ve supported them since I was a kid too, but unlike the Martyr’s I never got to see them play live. Then three years ago they played at Wembley in one of the annual International Series games. So that day, Myself and Chairman Mao made a trip to London to see the game. The team were awful back then starting the season with ten straight defeats. So it was no surprise to see them lose that day and fire the Coach during the flight back. The Raiders have one of the most colourful stories of any American Football franchise, but they have been pretty dire since the 80s. 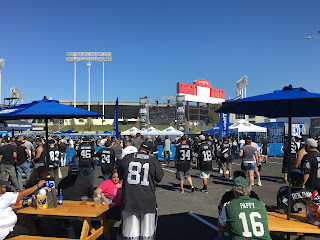 Despite that 10 loss start to the season the players they signed that season were pretty good and added to that a few older heads the team started the 2016 season back in September very much on the up. They would go on to finish the season with a 12-4  record and were it not for a broken leg to their starting quarterback in one of the final games they would have gone deep in the post season play offs. The club also announced at the start of the season their intentions of moving the franchise to Las Vegas in 2020.

So with positive feelings to the team and with the thoughts of the team moving from its original home in Oakland, I decided I had to go to a home game. So myself and Mrs D booked a holiday for September in the North West of the US – with the first Sunday coinciding with a Raiders home game.

Oakland is in the Bay area, a 3 city triangle around a lagoon. San Francisco all picture postcard and tourists, San Jose the heart of Silicon Valley and Oakland – the murder capital of America. This place is RAF.

We stayed in Emeryville just at the end of the Bay Bridge on the outskirts of Oaktown and at 9 am we left for the stadium for a 1pm kick off. It was 95degrees as we boarded the monorail for the stadium. Monorail makes you think of Disneyland, this one was full of people from the hood. It was sinister. As we got nearer the stadium the train filled, everybody decked in Silver and Black. It was hot as hell and there was a tension in the air. In fairness most people were carrying boxes of booze rather than Glocks and Uzis. It felt exciting. 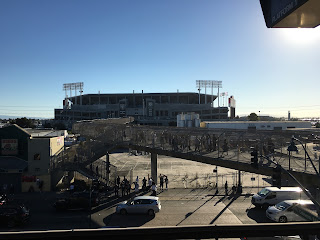 On arriving at the stadium (The Coliseum) I was to find out why the club were trying to relocate. The stadium was a 1960’s built, concrete and barbwire relic. As we walked over the bridge to the stadium we had to pass through a barbwire and chain-link tunnel, all the while passing people with small impromptu stalls selling hot dogs and beer. Entrepreneurs – the American Dream aye.

The car parks were full, it was an age to kick off, but there was one car park that was reserved for ‘Tailgating’. We headed there and joined the throng of people standing at the back of pick-up truck all with huge BBQs and bars. The sights and smells were amazing as each group tried to out-tailgate the next. Whole animals were being spit roasted and the sides of vehicles were transformed with beer pumps, optics and salad bars. These guys were prepared. 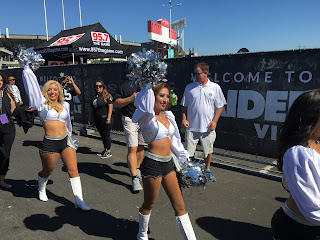 After a few beers and a bite to eat we entered the stadium early as I wanted to take some photos. Two gun searches later we were in. I went for a beer - £7. Owch. I drank it and moaned about every penny of it. When I finished I bought two more – it was hot as hell remember.

The game started and we were lucky to be sat just under the overhang of the second tier of seats. Five rows in front they were baking. The game saw the Raiders constantly trying to catch up with the Atlanta Falcons (who narrowly lost the Superbowl at the end of the season) and with every time the Falcons extended their lead the tensions grew. We sat in the Area known as ‘The Black Hole’ and the sign at the front says, ‘Footballs most Notorious Fans’. A bit like Milwall I guess. 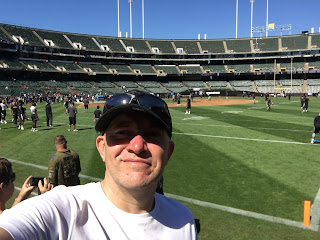 By the middle of the second half the crowd could take no more. Pockets of arguments turned into full fisticuffs. The security guards were not like the UK, these are more like psycho nightclub bouncers – they were loving it.  The row behind us was reserved for the disabled, but that didn’t matter. The words, “B***H, N****R and M**********R” were followed by grappling, crutches and a wheelchair all up in the air. I stood between flaying limbs and the Mrs and she whispered to me, “These people are not very nice are they?”, followed by “You take me to some classy places Donovan”. 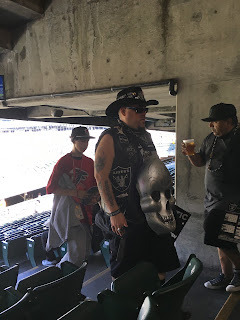 The Raiders lost (I’m a jinx) and we headed back to the hotel. It took us an hour to walk the 500 yards back to the monorail. It kicked off a few more times as someone launched a few cans of beer at a few Falcon fans. But both me and my better half had a great day. If you’re in Vegas in 2020 I would thoroughly recommend going to watch the Raiders there. Oakland is for gangsters and diehards only. 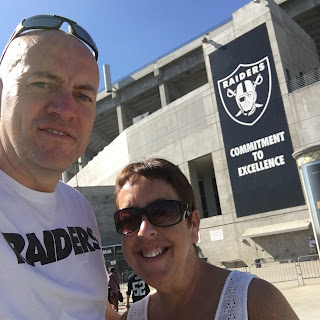