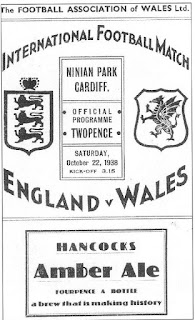 As the country breathed a collective sigh of relief as the spectre of war with Germany appeared to have receded a few weeks earlier following Prime Minister Neville Chamberlain’s announcement of ‘Peace In Our Time’, people’s thoughts turned to the Home International Championship.

With matches against foreign countries still something of a rarity, fixtures against the home nations formed the staple diet of international football at this time.

Wales opened their Home International programme during this season with the visit of defending champions, England, to Ninian Park. The England team, which contained Stanley Matthews, Tommy Lawton, Vic Woodley and Eddie Hapgood, was widely regarded as being one of the strongest sides England had been able to field for some considerable time. Not surprisingly the England party, which also included F.A. Secretary, Sir Stanley Rous were in high spirits when they arrived at their hotel in Penarth to spend the night before the match.

With the prospect of such talent on view, the game naturally captured the imagination of the Welsh sporting public. When the gates at Ninian Park were closed thirty minutes before kick-off, over 55,000 people, including the Secretary of State for War, Mr. Hoare-Belisha and Italy’s leading football administrator, Commendatore Vittorio Pozzawere, were squashed into the enclosure.

As the two teams took to the field to a stirring chorus of Cwm Rhondda, few of those present would have had any idea of the spectacle they were about to witness.   The game began well for Wales as they refused to be overawed by their opponents and on nine minutes they opened the scoring when Leslie Jones slipped a pass to Dai Astley who ran with the ball for a few yards before crashing the ball into the roof of the England net.

HOW THE TEAMS LINED UP 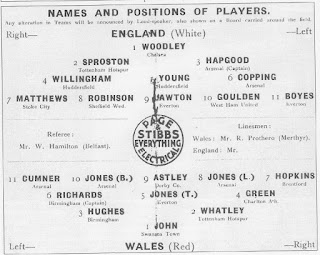 After about 30 minutes England secured a somewhat fortuitous equaliser. Following a melee in the Welsh penalty area, the ball was kicked against the arm of a Welsh defender. Somewhat harshly the referee, Mr. W. Hamilton of Belfast, pointed to the spot and Tommy Lawton made no mistake with the penalty kick.

Within a few minutes Wales were back in front. From a free kick by Green, Idris Hopkins out-jumped Young and Woodley to head the ball into the net. However, this lead proved to be short-lived as in England’s next movement Stanley Matthews ran into an open space down the middle and surprised John with a bouncing shot which flew into the net. There was no further scoring for the remainder of the half and half-time arrived with the score at two goals each.

England began the second half as if they meant business and dominated the opening stages of play. However, on the hour Wales took the lead when Bryn Jones scored with a low shot after he had been put through by Astley.

It wasn’t long before goal number four sent the crowd crazy. Bryn Jones started the move with a wide sweeping pass to Cumner. Cumner beat Sproston before turning the ball inwards to Astley who swept past Young as if he did not exist. Woodley, sensing the danger, came out but Astley swept the ball past him into the net.

This proved to be the end of the scoring and when the final whistle sounded hundreds of people vaulted the barriers and dashed across the field to the players, some of whom were in a state of sheer exhaustion as a result of their super-human efforts. Such victories against England, then perceived to be the best team in the world, were rare enough. What made this one all the more remarkable was the fact that all the Welsh goal-scorers, Dai Astley, Idris Hopkins and Bryn Jones together with the captain, Dai Richards, all hailed from Merthyr Tydfil.

Dai Astley joined from Dowlais Welfare before joining Charlton Athletic for £100 in 1928. He later had spells with Aston Villa, and . Astley was a prolific scorer for netting 12times in just 13 matches. After retiring Astley coached Inter Milan and after subsequent coaching spells in and , became a publican in .

Idris ‘Dai’ Hopkins began his career with Merthyr Town, although he did not make a Football league appearance for the club. After spells with Sheffield Wednesday, Dartford and , he enjoyed the best years of his career with Brentford. made 12 appearance for Wales (2 goals) as well as 9 wartime international appearances. After retiring from playing he held coaching appointments in Norway, Sweden, Northern Ireland and Turkey before opening a confectionary shop.

Bryn Jones had spells with Glenavon and Aberaman before joining Wolves for £1,500 in November 1933. At Molineux his career blossomed and in August 1938 Jones became the most expensive footballer in when he was transferred to Arsenal for around £13,500. Despite losing the best years of his career to the Second World War, Jones made 17 appearances (6 goals) for Wales together with 8 wartime appearances (1 goal) He ended his career as player-coach with Norwich City. Jones retired on medical grounds in February 1951 and opened a newsagents in north London.

Dai Richards began his career with Merthyr Town before joining Wolves for £100 in August in August 1927. He subsequently had spells with Brentford, and Walsall and over the course of his career made 21 appearances for . Dai’s older brother, Billy, had the distinction of appearing for both and . As a youngster at Wolves Billy was selected for the youth side to face . When the English selectors realised their mistake the selectors told Billy to “keep his trap shut”. He later made a single appearance for in the fixture with in 1933.

The significance of this victory can be borne out by the fact that four days later an England team, containing nine of the players who appeared at Cardiff, comprehensively defeated a ‘Rest of Europe’ eleven by 3 goals to nil at Highbury. Unfortunately could not build on this sensational start to their Home International campaign. A 3-2 defeat by and a victory over by three goals to one saw them finish third in the table on equal points but with an inferior goal average to champions and runners-up .