A season to celebrate

By D0n0van - April 08, 2020
The current season won’t exactly live long in the memory. I’m not exactly expecting to sit down and tell my grandkids about the 2019/2020 season in the future although it’s probably an average campaign for us really. Mid table safety and another reminder that we should probably save the entry fee for the FA Cup and save us all the bother. It’s been a season so bereft of excitement that it’s only the promise of cob & chips that gets me through the turnstiles most weeks. Yet still we go every other Saturday, very much martyrs to the cause, and of course we know that next season will be different, we just need to have faith and buy that early-bird season ticket.

I’m here to tell you to have that conviction and to prepare for a season of anniversaries and celebration as we stride confidently into the unchartered waters of the 2020/21 season. Next season will definitely be the one; a promotion campaign and a FA Cup third round tie beckons because we’ll be so busy reveling in our survival as a football club despite the odds that the fates will combine to ensure a season never to be forgotten. Trust us on this one.

Next season will be a busy one for the club as we celebrate milestones that have defined us as that unique, fragile and resilient institution that has tried to bring the best possible football to this isolated corner of the British Isles.

In August we will remember probably the one thing that sets apart from most current non-league clubs in that we were once upon a time a member of the Football League and that despite the economic pressures of the time we managed to survive a decade in the professional game.

We understand that the club has already been in contact with the EFL about the 100th anniversary of that first season of the league’s expansion in 1920 and how we as a club could hopefully share our commemorative events with other clubs from that inaugural Third Division South campaign.
Merthyr Town’s first game in the Football League was on 28thAugust 1920 so we are fortunate that we will be guaranteed a home game over the forthcoming August Bank Holiday to provide a focus for a centenary event.

Crystal Palace were the visitors to Penydarren Park on that day nearly a century ago with a 5pm kick off needed to ensure that the London club had enough time to make the journey to South Wales by rail. It would also be the first game in the newly expanded Football League for the visitors that day. 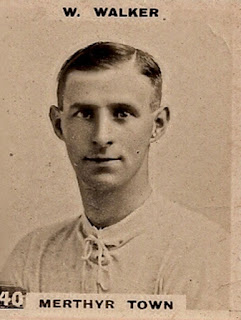 It was Billy Walker, recently signed from Coventry City, who scored our first ever Football League in the 25th minute of the game and although Palace equalized soon after and are reported to have had the better of the game it was our own Billy Chesser who won the game for us 2-1.

It would be great if Crystal Palace could send a team to us for a pre-season friendly match to pay homage to those football pioneers although I suspect they won’t take the train this time otherwise we may have to kick off at 5pm once again.
We’d already played Crystal Palace in the Southern League during the 1912-13, 1913-14 and 1919-20 seasons and the former England international Alec Leake had trained both Palace (pre-war) and Merthyr (post-war) teams too.

You’d like to think that pre-season this summer will be better than previous years with a few selected games to celebrate another landmark date for the Martyrs in that it will be a decade since our Supporters’ Trust defied the odds to ensure that semi-professional football continues at Penydarren Park.

We owe a debt of gratitude to Taffs Well FC who gave us a temporary home when we were 48 hours from oblivion so a visit to their Rhiw Dda’r ground would be timely to remind ourselves how our football club’s existence should never be taken for granted. You surely also must be curious to know if the miserable bar staff are still on duty there too.
Not all bar staff were so unwelcoming so another obvious choice for a pre-season game would surely be Shepton Mallet where we played our first competitive game as a fan-owned football club. A brilliant day out so let’s relive the optimism of those days when everything seemed possible and we hadn’t yet lost faith in our own capabilities to run a football club.

And while we’re on the subject of friendly matches let’s get over to Barmouth or Machynlleth for a day out too.
The summer will be a distant memory by the time we reach November but for those of us of a certain age let’s hope for a home game on Saturday the 6th so we can raise a few glasses to the team that tore Cardiff City apart 4-1 at Ninian Park on that wonderful Welsh Cup evening in 1990. Could we get as many of that brilliant team up to Penydarren Park to share their memories with us? Plenty of opportunities for us to sing “Blue Moon” once again followed by a tidy rendition of “We can see you sneaking out” to remember the mass exodus from the Bob Bank that night.
With so many milestones in our clubs’ journey to celebrate in 2020/21 it’s definitely a sign that the good times are ready to roll for us. Let’s be honest now we’ve tried jaded cynicism so let’s have a go at blind optimism instead. After all when we remember those great players and toast their successes we’re really celebrating the ordinary people of our town who have worked tirelessly to keep football alive at Penydarren Park so let’s not let them down.
Marc ap Dafydd