If we forget who will remember us .... by Chairman Mao 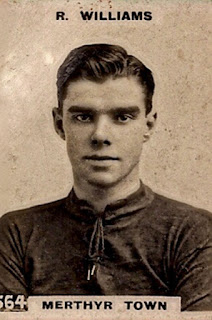 The idea for the Rees Williams Project came from a communication from the Everton former players’ group who are looking to renovate the last resting place of former Wales international player Charlie Parry. Immediately we looked within our own football club to see if we could give the same attention to our former international players. We only have two players in our history that played for Merthyr and Wales and our research soon found that the first of that duo Moses Russell is buried near Chepstow (any info on this grave site would be greatly appreciated) so we turned to a more local hero in Rees Williams.

We’ve covered the career of Rees Williams in this fanzine in previous issues but it’s worth remembering a remarkable player who played for two of the great Football League clubs in Sheffield Wednesday and Manchester United but of course he started on that journey from our own town.

Rees was born in Abercanaid during 1900 and his first club is probably Pentrebach but in April 1919 he made the move into professional football by signing forms for Merthyr Town who would soon enter the newly formed Third Division of the Football League. Rees, known locally as “Rhysi Tafarn” as his parents ran a public house, was one of the stars at Penydarren Park and made 65 football league appearances and was soon noted by many scouts including the FAW selectors who picked Rees for his first cap for Wales in Aberdeen against Scotland in 1921. He would gain 8 caps for Wales and score 2 goals.

Rees was seen as the successor to the great Billy Meredith which was a heavy burden on him but his clever play and ball control was admired throughout the professional game and many scouts came calling at Penydarren Park seeking his signature and eventually Sheffield Wednesday succeeded where Manchester United, Aston Villa and Sunderland had failed.

Rees was a great success at Hillsborough and only missed one game as the Wednesday won the Second Division title in 1926.

Rees Williams lost his place at Sheffield Wednesday after 160 games and in October 1927 Manchester United finally got their man but he could not reproduce his earlier career form and after only 31 appearances he was on his way back to Merthyr Town via Thames and Aldershot. His final club was Glenavon in the Irish League in 1933.

Rees returned to Merthyr and worked in the Hoover factory and coached the site football team but sadly he took his own life in December 1963 while worried over his health.

The challenge for us was to find his last resting place and to see if we could improve the grave of one of our most important players. Luckily we had an invaluable source of information in former club secretary, FA councillor and MTFC stalwart Anthony Hughes who was able to use his contacts at Merthyr Council to find the grave site in CefnCoed cemetery very quickly. 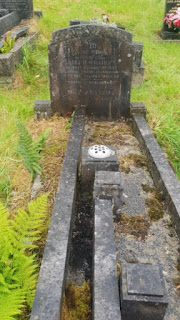 Anthony rose to the occasion and after a quick site visit he looked into the required steps for us to renovate the grave site. He also contacted local stone masons to see if they would be happy to support the project.

A social media appeal for funds to pay for the renovation was made and we received many promises of help especially from local Sheffield Wednesday fans and even the band Reverend & The Makers but for the first stage of the project we are indebted to one of Merthyr favourite sons Jonathan Owen for providing the vast bulk of the funding. An amazing donation to ensure we cover the initial costs of the renovation.

A month or so later and Anthony is on the phone to confirm that the stone masons had completed their work and what a difference they had made too. 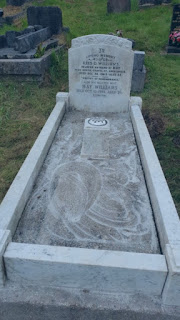 Dial M TV was brought in to provide a quick video blog on the project and John Smith of SameOldSmith photography did Rees proud by producing a brilliant eulogy to the player’s career and achievements.

The project isn’t quite completed yet as we still have plans to add an additional memorial plaque to confirm the career statistics of Rees Williams. Further funds will be required so please help if you can.

As stated in the video blog you can still view one of Rees’s Wales international shirts in the snooker room at Hills Plymouth cricket club and it’s well worth a visit.