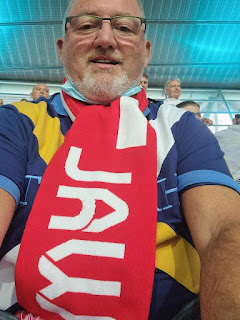 France, five years ago  presented most of us in Wales with the best football experience ever, arguably for some the best experience of their entire life.

Fortunate to be at 4 of those games including the semi final, the highlight was obviously the night in Lille and I was even able to take my son Shaun, wheelchair and all who still describes it as the best day of his life by a country mile.
This time around UEFA, along with Brexit, and the completely horrendous format of the 2020 European championships denied most of us any hope of a replay so for me, the chance to get to any games was too good a chance to miss, even if it meant mostly England games.

Have to say, the English FA has been more than good to me, and with some great people who have become great friends so I had no hesitation in telling them I was up for any tickets they could offer. Starting with a boiling afternoon and England v Croatia, I watched Wales' game against Switzerland in the White Hart pub in Holborn with a group of Leicester and Leeds fans who were top drawer and who seemed as pleased with our equaliser as me.

On the whole a good experience but with chants of 'no surrender' from the English during their National anthem it made me wonder if moods could change quickly.
After Croatia I saw England v Czech Republic and again the party atmosphere similar to France in 2016 was on show so all good and then it was the England v Germany game.

Driving up to the stadium for an earlier kick off The Arch pub rings out the predictable '10 German bombers' song but, still with my Welsh hat or scarf on I met some great fellas from Birmingham City, Villa, Derby and Reading and all at that time were first class. No issues, only well wishes for the game against  Denmark and against Germany it really was an amazing atmosphere despite 'no surrender' continuing to ring out now and again. 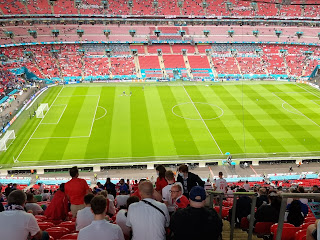 What really struck me at this point, despite the German bombers crap was how good the tournament had been, the atmosphere, camaraderie and how multi cultural the English support had become. Genuinely, it was pleasing to see all different ethnic minorities with the same passion for their team. Being a cynic, I did think well maybe, people are just glad to be out after the various covid lockdowns, and this was as much the reason for the good naturedness I witnessed but let's take it for what it is and watching football live was still like a breath of fresh air.

When I got to go to Spain v Italy in the Semi Final the tournament hit new heights for me with both sets of fans brilliant entertainment and the game absolutely as good as you can get. No nastiness, insults or threats.

It was England v Denmark next and I am still on a high from the night before, and again the atmosphere was electric but for the first time an undercurrent of tension was in the air, fans abusive rather than exuberant.  No problems for me however, with my Wales scarf still on show. Danes were extremely interested thinking I had got the ticket because I was sure Wales would beat them and then the Netherlands or Czech Republic to get to Wembley.
But, in the main the English fans are more concerned about singing about Scotland or abusing the Danes. By now I think they are not interested in me because Wales are just basically dismissed.

The Final changed everything. Travelled up early Sunday morning, went into Central London to check in and could see straightaway that this one was different, as it should be, being the Final but not in a good way.

Drove to Wembley so had no sense of the mood of the fans on the tube but having got to the stadium at 2pm it was clear things were already out of control.
By now, some of the merchandise kiosks had been forced to close because fans had climbed up on to the top of the cabins with one fan in particular having relations with a blow up doll - full relations mind and completely naked, and then had to fend off a barrage of bottles, cans and nitrous oxide cartridges.

Drug taking was happening everywhere, and in the plaza at the end of Wembley way and building all the way up to Wembley Park Station as the day went on, the entertainment of choice was throwing bottles and cans in the air and letting them land randomly. The crunch of glass under foot was unavoidable. No sign of Police or anyone else and by late afternoon the Euro 2020 volunteers had been sent home because their safety couldn't be guaranteed.

It got much worse as the day went on. The crowd were now feral with what seemed to be a crazy decision to just let them get on with it. Having been there for games with 100,000 capacity it was obvious that thousands of fans without tickets were there and with the knowledge there were close on 30,000 empty seats in the ground I suppose it was inevitable ticketless fans would try to get in. Apparently, it had happened in the Denmark semi final but had been kept quiet. I never saw any evidence that night to be fair. But, on Final day I did.

Wheelchair entrances in numerous gates were stormed with hundreds or maybe thousands getting through. The fans inside saw it purely as a chance to fight so the concourse soon became messy with plenty of fans getting punched and kicked.
It didn't stop them getting into the ground though and the most bizarre thing of all was they were allowed to stay, in seats, aisles and entrance tunnels. More fighting between paying fans and blaggers and then fans leaving to find other seats because they couldn't see the game. Total chaos and it has to be said, a total shambles in the stadium.

Having enjoyed the tournament it was difficult not to have time for Gareth Southgate and his team who genuinely seemed to be doing their country proud. And, with our former striker Ian Mitchell a big part of that team.

But, anyone who wasn't an England fan and who saw the events of Sunday would have been hard pressed to want anyone other than Italy to have won. Coming out of the ground, some Italians ran for their lives and one Police Officer told me he was relieved England lost because it meant he might get home before the morning.
Genuinely disappointed for my many English friends and also for the great people at the FA I know who are devoted to improving our level of the game. They are now fearing the sanctions. But, ultimately, the press on Monday morning said "same old England!! Out on penalties".

Also, the sadly predictable but depressing racial abuse of Rashford, Sancho and Saka, all of whom are the future of that team. How lucky are we to have the relationship between fans, players and coaches in Wales. Same old England on the pitch wasn't accurate for me, they were a fraction away from winning it, but off the field there was no doubt whatsoever, we did end up with the same old ENGERLUND. Nothing has changed.