LIFE IN THE SOUTHERN LEAGUE SECOND DIVISION DURING SEASON 1911-1912

By D0n0van - September 08, 2017
The season 1911-12 was certainly a successful one for Merthyr Town as they finished champions of the Southern League Second Division. This was no mean feat as, over the course of the season, they had to contest local derbies with Cardiff City, Pontypridd, Ton Pentre, Treharris, Aberdare, Mardy and Cwm Albion. The biggest ‘name’ in the division was, current Premiership side, Portsmouth, who had been relegated from the Southern League First Division at the end of the previous campaign. Not surprisingly, the south coast club were hardly enthusiastic about the number of visits which they would have to make to the South Wales Valleys.

In an attempt to avoid travelling to the Valleys in the winter months, new Pompey Manager, Bob Brown, shrewdly arranged the bulk of his Club’s away fixtures for the first half of the season. Even so, the facilities and pitches at many of the South Wales grounds could, at best, be described as basic. What follows is the views, comments and experiences of a Portsmouth Evening News reporter of a number of Welsh teams and journeys to Wales.

Portsmouth’s first trip to Wales came on September 9th 1911 with the away fixture at Treharris. On disembarking at a remote railway station, several of the of the Pompey squad thought that they had arrived in a foreign land. If the team felt this was bad, their spirits fell even further when they saw the Treharris ground. This was described by the reporter as being:

When the match got underway, our reporter felt that :

“Treharris played an utterly unorthodox and primitive type of football.”

Nevertheless, primitive football or not, Treharris ran out winners by 2 goals to 1.

Pompey’s next away trip was a journey to the Rhondda to face Ton Pentre. Once again, the reporter was less then impressed stating:

“The ground is quite miniature and as rough as it is small. When you
stand between the goal it seems anyone with a long arm could touch
the corner flag. The playing surface is covered with coal dust.”

This time Portsmouth managed to overcome the conditions and won the match by a goal to nil.

Another fixture which Pompey had to fulfil was Cwm Albion away. At this ground, conditions were even more basic, as our reporter relates:

“A guide was employed and led us to an unenclosed ground ......
across two fields ankle deep in mud. The dressing room was a
disused cow shed although the home team changed in the village. I
I was then shown a broken wooden box marked PRESS from
which to write my report. The game was watched by a few hundred
people, most of them safely beyond the reach of the collecting box,
on the slopes of the hill surrounding the ground.”

Bad as the conditions were, they did not stop the south coast club from thrashing Cwm 6-1. Just as fortunate was the fact that Pompey did not incur the wrath of the Cwm fans, a section of which, after one match, chased after an unpopular referee threatening to throw him in the river. The official was forced to take refuge in a house until a police escort arrived to take him to the railway station!

The last Welsh away trip which Pompey had to make in the first half of the season was to Pontypridd. The reporter was equally as scathing of the facilities here stating:

“Almost unbeatable at home, they had a cinder track running through
The centre of the pitch from goal to goal. The stirring song ‘Land Of
My Fathers was sung throughout the game and Pompey lost 3-1.”

This fixture marked the end of Pompey’s visits to the Welsh Valleys until March 23rd 1912. On this occasion they faced the journey to the top of the Rhondda to face Mardy. This trip proved to be their most difficult and expensive of the whole campaign. Portsmouth had to make the journey at the time of a miners’ strike. They set off on the Friday evening but only got as far as Reading when their train ran out of coal. Consequently the team was forced to stay overnight in Berkshire. The following day, few trains were running due to the effects of the strike and Pompey finally arrived in Mardy an hour after the published kick-off time. However, by the time the game had ended (Portsmouth won 4-2), trains had stopped running for the night in the Rhondda. This meant Pompey had to hire cars in order to get them to their railway connection in Cardiff. In all, their ‘away-day’ to Wales had cost the club £40!

Many of the Welsh clubs were just as disorganised when they visited Portsmouth. Early in the season, Aberdare had difficulty in getting a team together and hardly any of their spectators made the journey to the south coast to witness their team go down by 4 goals to nil. Portsmouth secured promotion by beating Treharris 5-1 at Fratton Park. At this time Treharris were so short of money that they had to borrow £5 from Pompey in order to enable them to return home to Wales. At the time, Portsmouth probably felt that it was money well spent as at least they would be spared from similar fixtures the following season.

What the Portsmouth Evening News reporter failed to mention in his article was the much better facilities and support enjoyed by Merthyr Town. The team played at Penydarren Park, which at the time, boasted a pitch surrounded by a running track along with a covered stand and enclosure. In addition, although Merthyr Town had only been formed as recently as 1908, their support was numbered in thousands and was drawn from all sections of the local community. On 23rd September 1911, Pompey visited Penydarren Park and a crowd of around 5,000 saw them run out winners by 2 goals to 1. On 30th December, the Merthyr team, accompanied by around 500 supporters travelled to the south coast for the return fixture. Although missing four first team regulars, the Town team held their full-strength opponents to a 1-1 draw. The Merthyr Express reporter at the game felt that:

“The game was certainly the most exciting played on the Portsmouth
ground for many a long day. ...... Merthyr, for all their reserves,
Made a great impression, They deserved their point for their pluck,
And Savage’s goal was certainly a beauty.”
At the end of the season, this point proved to be crucial as Merthyr Town piped Portsmouth to the title on goal average! 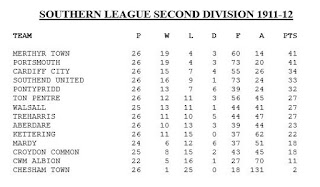