We hit a puddle in Strensham services at 50 miles an hour. At that point the water tumbled down every window the minibus. Everyone gasped and grabbed their seat, confident that we were about to crash and meet our maker. Everyone except the driver, Seagrent Bufoonery himself, Nigel H – His squeal of excitement as he nearly killed all 15 of us pierced the air. We’d only been on the bus about 5 hours and still had a good 90 minutes left to get home. Blackpool is a bloody long way and Hulby is a mad driver.
We’d set off at 6am the previous morning. I waited at the end of my street and the players bus passed me, excited faces in every window. The Noise bus then passed me and the occupants gave me a variety of the Vicks and Nescafe signals – my life was in tatters. Pingu’s daft face was the next to greet me, he was 20 minutes late, but we had all day. I got on the bus and Hulby passed me a can. Morrison’s finest export at 6.30am was unique. If you have an iron deficiency in your life forget regular B10 injections, you can get all the metal you will ever need in your bloodstream from drinking that brand of booze. I won’t be able to walk through the metal detector at the airport for a few years.
As is the norm, the flow of alcohol, general excitement, talk of bets, past trips, future trips made the morning fly by. We’d enjoyed 9 weeks of unbroken sunshine and near Sahara conditions, so as we entered the outskirts of “the Vegas of the North” it was no surprise that the heavens opened and we got a good soaking walking to the hotel. I was already on my second set of clothes as I’d had an argument with a Cumberland sausage roll on the way up and the Brown sauce that beautifully caressed its skin decided to launch itself down my classic 1976 Juventus top.
We stayed at a place called Romley House. It’s called a Hotel, but it’s not even close, this is the dirtiest, smelliest excuse for a hotel I have ever seen, nevermind stayed in. Myself and Chairman Mao were boarding together as usual, we found our room, whilst The Gwenties (Louis, Rob and Co) were across the landing. Every bed in the gaff had different quilt covers, mostly donated from charity shops. Louis pulled back the mattress cover to reveal all manner of stains. We sat down for a pint minutes later to look at the Trip Advisr reviews. Here are some samples>>>>>>>>>>>>>>> 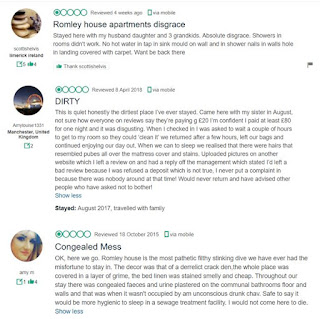 Undetered and keen to have a good time we embarked to AFC Blackpool’s ground. In the Shovel’s pub we met all the other travelling Martyrs. The Players and Kitman for the Day, Jeff Hurley had just arrived at the ground. The pitch was rock hard, had little grass and being based near the sea on a flat patch of land near the airport was subject to gale force winds. Boy did it blow.
The ground was very much like a run down version of Cirencester’s. The bar was full of Merthyr fans and with only some old guy Billy behind the bar the place was struggling to cope with the mountain men from South Wales. As we do, we make the best of the day. Natallie and Kish stepped up and soon got the bar moving. Bennett and Ellis bought an 8 pint urn of Dark Fruits, the beer normally retailed at £3.50 a pint, so they had a bargain when the 8 pints came in at exactly £28. Ellis was still scratching his head at 9 o’Clock that night at this equation.
The match was awful, the wind saw to that. It was only in the second half when the conditions eased and Ryan Prosser took the field that any composure was found. The 2-0 win (Pross and Lee Price) was about right. Both sets of fans were joined in The Tin Hut stand by a few lads from Whitehawk FC – their 9 hour journey from Brighton was pretty impressive. Stickers, scarves and pictures were swapped and we all went back to the bar for a few more.
We watched Geraint Thomas (GRUNT) secure the Tour de France victory and we watched Billy pour countless glasses of froth. No beer, just froth. The Gaffa made each of the new players sing a song for the supporters – Craig McDonnell’s rapping was far too polished for my liking – he’d been practicing!! Jeff Hurley topped off his first day on the kit with a rendition of “Merthyr Boys we are here”. The local dogs were glad when the rest of the club house joined in. And the usual suspects for Minder and Wolvesy did their party pieces.
The pace we were drinking plus the 1.30 kick off time saw us all leave the ground by 4.30, as the place had run out of all lager and cider. It was just like being back at those halcyon days of the Western Division. Back at the shovels, the early exuberance of the day was catching up with a few. The Players were also staying up for the weekend – bonding I think its’ called. I was bonded as a newt later that evening.
Gavin organised a boat race for all those enjoying their birthday that week. Bennett, Hopey and Hulby was embarrassed by one of the squad’s youngest in the event. As the last drink hit the belly the weather went mental. The coach took us all back to The South pier – a big thanks to Fat John Bishop for driving us!!!
From there we walked the Golden Mile – fairplay Blackpool is a shit hole. We visited a few half tidy boozers on the way back to the Hotel. The Manchester was nice and the staff, residents and clientele of the Lyndene Hotel got to see Pingu’s magic act. Spending an hour lifting each other up just using our fingers, had us all confused and suitably entertained. The resident’s playing bingo didn’t know what to make of it.
A quick pitstop at the Hotel Bazra for a change of shirt and we hit the night. Ma Kelly’s was cool until the Cheesy singer came on. Next door in the lighthouse saw Pingu insist he was next on the Karoke for about an hour. We were very close to being asked to leave. In that time only two people had sung – back to back Meatloaf songs can do that. As the night dragged on, we were in search of the mystical Soul Suite by the North Pier. This was to be the Eldorado of our evening. Sadly, this was now a disco bar playing awful music to awful people. Lets go!!!.
By 1am I was back at the hotel full of all manner of green and orange drinks ‘The Penguin’ thought we should order. In the last 200 yards Wolves had gotten detached and phoned me to say he was lost. So I went out to find him. As the door slammed behind me, I flinched knowing that I’d left the key on the window ledge. The reception was about 400 yards away and it was pissing down – biblical shite. The night porter called me many things as he escorted me back to the Romley, none of which were nice.
The morning after the night before were tales of pretty crap nights out. A few who will remain nameless didn’t even make it back out after the 7pm pitstop at the Hotel Josef Fritzel. A cooked breakfast and an hour of hearding cats, saw us back on the minibus. Wingnut decided to come back with Jacko so he could leave an hour before us and get home early afternoon. Hulby did the honours driving and somehow as we got to Stafford we passed Jacko’s motor. They were pedalling like hell, getting nowhere and had experienced some time vortex somewhere north of Manchester.
The journey home was torture as the M6 was shut and 6 hours after leaving Blackpool the sofa was a comforting sight. We won’t be going back as next year – thank God. The plan is for a trip to Belfast or Liverpool. As a pre season trip goes it was a blast, just a shame Blackpool is stuck in the 1960s.
Donovan