Wales qualified for a second successive Euros last month with a feast of footballing panache, resilience and - rarely for us lot - little drama with successive 2-0 wins over Azerbaijan and Hungary. 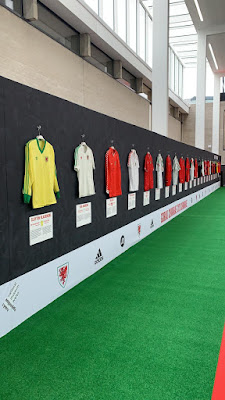 But with that succulent feast came the perfect side order as for a week either side of that double-header the St Fagans National Museum of History in Cardiff, hosted the Celf Crys Cymru / Art Of The Wales Shirt exhibition. I was fortunate to be invited to the official opening as well as the FC Cymru live event at which the likes of Ian Walsh, David Giles, Natasha Harding, Robert Earnshaw and Joe Ledley reminisced about their memories of wearing the dragon.

The exhibition was quite a simple affair, but therein lied its strength. Upon entering the newly redesigned spacious entrance at the Museum - recently crowned the best museum in the UK - visitors were met with an expanse of 28 matchworn players’ Wales shirts celebrating the aesthetic beauty of the classic red shirt...and yellow, and white and black….

Jointly curated by author Neal Heard (@nealheardauthor) and matchworn shirt colle+9685ctors Simon ‘Shakey’ Shakeshaft (@walesmatchworn) and Neville Evans, the exhibition w0as a meander through shirts that conjured up heady memories of heroes and Wales matches past, as well as demonstrating how style and technology in shirt design has evolved, and, controversially for some, the Welsh crest has changed over the years. 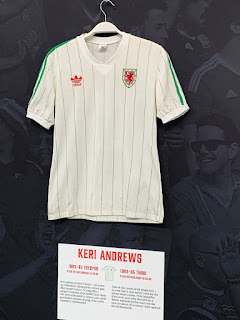 In this sense it was not a definitive history of the Wales shirt - though surely that is an exhibition that now has to happen! - but it was the perfect appetite-whetter for the written version of that history that hopefully will see the light of day before too long.

Each shirt was a matchworn or match-prepared players’ one from the personal collection of Shakey or Neville, but not necessarily from a senior men’s international. Reflecting the growing profile and popularity of the national women’s team, there were Jayne Ludlow and Sophie Ingle matchworn shirts. And for the real nerds, sorry, enthusiasts, there was the stunning white with green pin stripes Adidas away shirt from 1984-86 that was only ever worn in an under 18 international in 1986 versus The Netherlands.

A Neville Southall goalkeeper shirt from the early 80s ensured that that union’s membership was represented. Though none of Big Nev’s multi-fluorescent 90s jersies were on show; presumably in the interests of health and safety for fear of blinding people.

It’s a Len Allchurch shirt from 1957 that gets the meander started, through the classic 1970s Admiral ‘tramline’ shirts, including a Leighton James home shirt, and then onto the adidas and hummel-defined 1980s represented among others by:
-          A Mickey Thomas home shirt from that win at The Racecourse versus Spain
-          A fetching long sleeve yellow and green adidas shirt worn by Kevin Ratcliffe in the 1982 1-1 draw in Valencia
-          Peter Nicholas’s white Hummel shirt from the 1988 World Cup qualifier in Amsterdam (the first time the senior men had ever worn white)

For me the early 1990s Umbro shirt are those that conjured up most of my formative Wales memories, not least because of the legends’ shirts on show such as Ian Rush, Barry Horne, Mark Hughes, Gary Speed. Football shirt design was gradually becoming increasingly bold or garish - depending on your tastes - but to my eye, the attractive white ‘candy stripe’ away shirt that Deano wore versus the RCS in 1993 has aged beautifully. 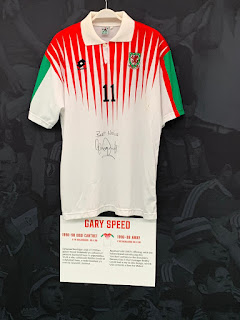 Wales’s short-lived late 1990s Lotto phase was represented by Gary Speed’s vertical-striped home shirt and a signed ‘Pocahontas’ away shirt, both signed by the great man. Condensing Wales’s sartorial history into only 28 shirts was hard enough but surely Neal and Shakey had a particularly difficult time narrowing down which of the only three Kappa shirts that were on . But they plumped for some belters: Giggs’s home Kappa shirt from the first leg of the Russia play-off (featuring match detail embroidery for only the second time since 1974); Danny Gabbidon’s black Kappa shirt from a 2005 qualifier in Poland; and Craig Bellamy’s stunning white with alternate red/green shoulders third shirt worn by at The Racecourse versus New Zealand in 2007.

Kits these days are rotated annually and there was a plethora of kits from the Chris Coleman reign and the Euro 2016 campaign, the highlight of which are Joe Allen’s shirt from Lille, and the one-off, never-commercially-available yellow shirt in which Hal Robson-Kanu scored the winning goal in Moldova.

The exhibition was in partnership with the FAW, JD Sports and Adidas and also served as the backdrop for the official launch of the new Wales home shirt; and two player-issue shirts in the new design completed the exhibition: one for Sophie Ingle to wear in Northern Ireland during the exhibition’s first week; and for Gareth Bale to wear in Azerbaijan.

If I were to be picky I’d have loved to see Simon Davies’s long-sleeve pale yellow Kappa shirt from the 2002 Croatia friendly, or the all blue Kappa shirt never worn by the seniors but worn in an Under 20 match versus England (I know Shakey has them in his collection!). It was also a shame not to see one of the green away/third shirts that have featured among the Wales wardrobe down the decades; but, as I say, this is nitpicking.

It was a fitting homage to the Art Of The Wales Shirt as well as a fascinating glimpse into a small selection of Shakey’s collection. But most rewarding was seeing Shakey out and about, looking well and sounding chipper having earlier this year suffered two strokes. He attended the Hungary match and no-one deserves to be there in person to watch Wales reach a tournament more than Shakey.

Though coinciding the exhibition with the Hungary match was a masterstroke, ensuring plenty of fans could make a pilgrimage to St Fagans en route to the game, it would be great if fans elsewhere in Wales could have the chance to see the exhibition. Maybe with some Martyr town and club connections such as matchworn shirts belonging to Gordon Davies, Mark Pembridge, Gavin Williams or Nick Deacy.