And number 1 is Tommy Hutch….


Whilst spending 10 minutes at my work desk trawling through the usual bilge on twitter, hidden amongst the 144 characters from Welsh Independents, Anti Brexit and NFL posts, the picture below popped up. Rob Haggert (one of Twitters funniest local posters - @FaggotsnPeas ) had responded to a post from a Manchester United blogger.
Tommy Hutchison is a Merthyr terrace legend. He played for the club in the Conference from 1991 – 1994, playing at PP until he was 46. His 73 appearances for the Martyrs somehow only netted 2 goals, neither of which I can remember, but it was his ability to setup chances and bamboozle full backs that gave his such cult status on The Wank Bank.
That’s right Tommy was 46 and was probably the best player at the club. On his day (like an appearance versus Colchester United in the FA Trophy) he was imperious and majestic, but when you look at Tommy’s illustrious career, nowhere do you see the seventeen times Scottish international ever played for The Red Devils. So how was this picture on the web? 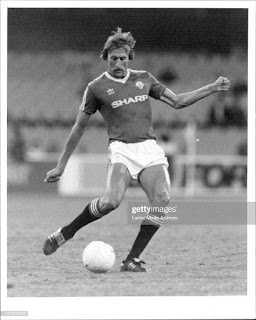 Nobody had an answer to this tweet, but fortunately Haggi’s dad was an avid red and also an avid programme collector. So with the date of the kit pinpointed to the 1984/5 season some detective work was needed. On the 25th August 1984, United played Watford in The ‘Canon League’ Division One, a 1-1 draw where Gordon Strachen (who scored the only United goal), Alan Brazil and Jesper Olsen made their Old Trafford debuts.
The United Review sold that day, covered their end of the 1984 season tour to Australia and Hong Kong and for a club as corporate and professional as its is seen today, the summer tours of yesteryear seemed a little less organised. A United starting line up including  McGrath, Blackmore, McQueen and Hughes was joined by Tommy Hutchison and Frank Worthington when United played the Australian national side  in front of a meagre 16,000 souls in Sydney.
The tour had started with a game in Hong Kong versus a team called Bulovea SA and it was during the early 80s that Tommy made 22 appearances for the Hong Kong team. The first game saw United  defeat Bulova 4-2, with Hutchison scoring for the home side.
With United short of experienced players for the Australian leg of the tour, where they would face Nottingham Forrest and Juventus, they signed up the Scotsman, Worthington and Peter Barnes for the tour. 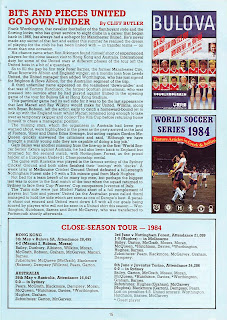 Tommy started all three games down under, lining up alongside Worthington,  Alan Davies and Arthur Graham in a goalless draw.
In the second game versus Forest, Hutch started in a midfield with Remi Moses, Alan Davies and Barnes. United won with a single goal from a very young Mark Hughes.
And in the final game versus a Juventus team with Michel Platini at his pomp saw a goaless game go to penalties despite all three guests hitting home from 12 yards united lost the shootout.
And that was Tommy’s brief spell playing for United, by the end of the next season Tom had signed at the Vetch where he would become settled in South Wales and would grace PP many times in the Welsh Cup before signing for Merthyr in 1991.
Donovan