To Buda/Pest By the Re-tired Sec


Well after a long final season it was off on the trail of international glory with our country.  I missed Croatia as I was in Benidorm on the Merthyr Cafu’s stag.  The less said about my drinking in Benidorm the better, I think I spent more asleep than I was awake, and it was another of those “how did I come home in one-piece trips.”
I arrived in Budapest 24 hours before the rest of the Merthyr party. I was given strict instructions by our diplomatic ambassador “aka Minty” to do some early reconnaissance to find cheap bars before the invaders arrived.  However I decided if I wanted to see the sights in Budapest I needed to do it before that lot showed up as the only thing I’d see from that moment on is the bottom of a glass.  So Monday morning I had a wander around the beautiful city of Budapest.  Now it had been described to me as the Amsterdam of the East, with plenty of cheap bars and one or two sex shops, but not so much drugs.  I stayed out of them of course as I’m sure would expect from a man of my character.  The 2 landmarks that struck me the most were either side of the River Danube which separates the Buda and Pest part of the combined city. 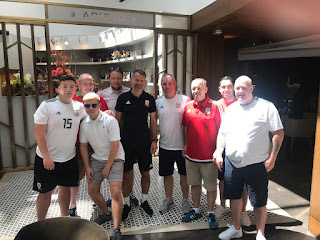 The Danube memorial is one of the most chilling sights that I have ever visited along with the village of Oradour-sur-Glane in France, which I visited during the Euro 2016.  The horrifying story behind it was regaled to us  by Hullbacino (he read about it on FaceBook apparently).  It is where Hungarian Nazi’s took Hungarian Jews, made them take their shoes off before shooting them.  Chiiling to the bone, but on these trips though I find it important to visit these places to remind myself of the horrible acts that have been and still are committed throughout the world.
The Castle, which you can see in the above photo, is in the Buda part of the town and is an incredible place to visit.  It looks huge from the Pest part of the city, but when you get to it its vastness is incredible.  You could have literally spent all day walking around the castle, but alas duty called and the boys had landed which meant I had to meet them off the bus to walk them to the nearest pub.
I greeted them in the 35 degrees heat, which does nothing for my fair complexion.  Having spent several hours in the airport lounge in Stanstead the boys were in a jovial mood as you can imagine.  The arrived on the match day minus 1, and we spent much of the day walking around bars.  We did of course meet up with the Chairman, and had a few beers night before the game.
Match day saw some of party meet the manager, while me and Hulbacino enjoyed an early lunch while watching the girls go by.  I’m not sure what he was saying to the ladies in Hungarian as they walked past, but it might as well have been “can I give you an STD luv“ based on the looks they shot him.  Then Wingy decided he need a Swansea Road suntan, and ended up looking like a tomato.
Now gameday for me and the boys mean two different things,  A comment I often hear is the game is the worst part of the trip, while people drink so much pre-match so they can’t actually remember attending.  Now I have never understood that, for me the whole point of going is to watch the football, and enjoy a place I probably would never have gone to in the process.  So I’m the type of person who likes to take it easy, and get to the ground early.  Now this flies in the face of the time for one more point culture (which turns into 5 more), getting to the ground in a rush and have to fight my way through 2 turnstiles.  So arrive early on my todd I did.  I bumped into a member of the re-tired secs club from Abergavenny Town, who did not recognise me at first, and when it dawned on him who I was he responded with “F**k me you’ve lost some weight.” 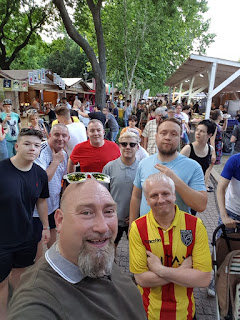 I was given charge of the flag, under orders to find a good spot.  And to be fair I did, and it wasn’t just me who thought so.  “The Progress through Stability” flag received plenty of air-time.  Now the game was played in the Ferencvaros Groupama Arena while the Puskas Stadium is being rebuilt for the Euro 2020.  The stadium itself was like any other modern stadium, they all the look the same and have no character don’t they.  I had to show my photo ID, I was randomly checked it seemed as there was not the 100% check that there was in Croatia but all was good.
After placing the flag in the best spot, I then looked out. Now I remember back in the day at the home of football, we used to watch football matches behind barb-wired fences post Heysel stadium when we triumphed over Atalanta but this was something else.  There was this incredible layer of black netting which seemed to be for the away fans only.  I can only describe it as watching a game through Spiderman’s web.  I was far from impressed.
Well with this trip the game really was the worst part of it.  Some pretty inept tactics from an inexperienced manager who polarises opinion at the best of times were blamed.  But as always it’s the players who win and cost you games.  We had a gilt-edged chance which Aunty Brenda’s close personal friend fluffed, and moments later we were behind, and then ultimately defeated.
Well another trip over, a great trip which ultimately ended in disappointment, or as pre JCL Wales refer to as the good old days.   I did not find the Hungarians particularly welcoming tbh.  They have a right wing government and seemed to resent you being in their country (remind you of anywhere folks?)
But enough politics and back to the football.  As the saying goes, “we go again.” Slovakia in October, followed by Azerbaijan in November, with a trip to the Faroes watching the ladies team in August to look forward to as well.  I’m sure you can’t wait on my utterings.  It’s a hard life……………….. The end.