Wales penultimate qualifying game was in Azerbaijan.  Even though I’d never been to any of the countries we were drawn against, Azerbaijan was the country I looked forward to visiting the most.  The flight was via Kiev with a bit of a stopover, but that did not put off the Merthyr boys.
Prior to flying I had to navigate the Azerbaijan visa process.  Pretty straight forward in itself, until you had to attach a photo of your passport page.  Yours truly not only had to sort out the size of my photo but 4 other people as well.  We may have to get used to the visa process going forward. But let’s avoid talking about Brexit shall we, because let’s be honest who knows as its being made up as we go along, and what was said yesterday is probably a lie today anyway. 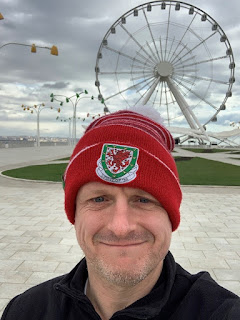 We landed in Baku, in a smallish but immaculate airport.  A Bolt taxi (think Uber) from airport to hotel cost us £4.50, and was around 8 kms.  Now you may have heard Azerbaijan is oil rich and keen to show off its wealth.  I can vouch for this.  Fuel prices were dirt cheap and they had the most well lit petrol stations I’d ever seen.  A step up from the old Action garage anyway.
The taxi driver proceeded to show which parts of our route were on the Grand Prix circuit and decided to emphasise his point by then driving like a Formula One driver.  Now at 4am in the morning this was not welcome by yours truly as I hung onto the door.
We arrived and our hotel was stunning, and just off the Grand Prix track.  I would recommend Boutique 19 Hotel to anyone thinking of visiting Baku.  Now the awkward thing about Baku was you could not use your mobile data as you can in other European countries.  As a European citizen you are able to use your UK data in most places I have visited, not the case in Baku where the data charges were astronomical.   Just as well we are part of a group that provides such a luxury in most places I visit.  Will this be same post January 2021 I hear you ask?  I’m sorry but no-one knows, and no-one even realised the real-life situations which will have a considerable impact on us.  When Chad from Essex goes to Benidorm in the future, what will he do, how much will it cost him for the privilege of using his own phone. 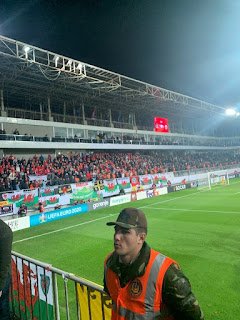 One of things I wanted to do in Baku was visit the Caspian Sea, and that was the first thing we did.  A fellow traveller wanted to dip his feet into it.  But as we got closer, he changed his mind.  One look into the sea, and you could see the oil beneath the surface.  What a disappointment.  The city itself was fascinating.  People were friendly, but you could tell the police are very authoritarian out there. I took a photo of a building, and a police officer came and waved his hands at me to not do so.  Ok, sorry about that, I just liked the building.  The match itself was on day 3 of our stay.  I did experience a welcome relief from the netting of Budapest and Bratislava, but this was replaced with a line of army and security standing between us and the pitch.  What did they expect?  Did they think we were going to jump onto the pitch do you think?  It felt a bit OTT, football fans being treated like potential law breakers (again).  The game was won, and lager drunk in celebration.
We then went on a free walking tour the next day where I learned a lot more about the city.  Its culture is based on Muslim culture, and while it is not an overt Muslim culture now, you can still see the influence.  Until of course the Soviets fancied their oil and they came in.  Following Azerbaijani independence, the country has grown in prominence, and you can see the wealth they have and the way it is being displayed.
A must do in Baku is the Flaming Towers.  3 giant towers, which at night are lit in array of different colours and patterns.  We visited the TV tower out there which is a restaurant with a rotating floor.  This affords you excellent views of the Towers, with reasonably priced food and drink.
What I liked the most about this trip was due to difficulty in travelling there, the stag/knob culture that was prevalent in Budapest and Bratislava was not there.  There was a more mature fans base present.
For those of you travelling to Baku this summer, check the visa process.  Consider buying a SIM card when you are out there (but not at the airport) to use the city WiFi which only works on an Azerbaijan SIM card.  Most of all enjoy yourself, respect the people, but look after yourself and enjoy the football.