Who were The Carpathians? by Wolvesy 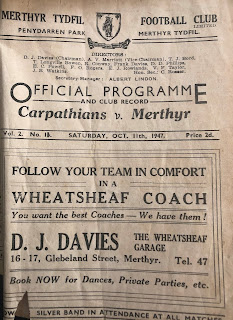 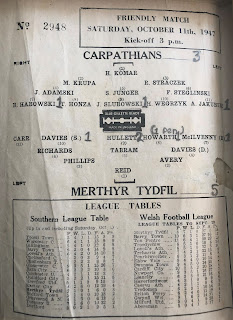 In 1947 Merthyr Tydfil AFC found themselves with a spare Saturday in October due to English county cups taking precedence so as was the custom in those days they looked for a friendly match to keep the football hungry public of a post-war town happy.

Therefore on the afternoon of 11th October Merthyr Tydfil lined up to play The Carparthians in a friendly challenge match.

The game itself seems to have been forgotten by history which is a shame as the background of the visiting team was a tribute to the new Britain emerging from a global conflict.

It seems as if the Merthyr public also didn’t recognize the quality of the team visiting Penydarren Park as the match programme for the following week’s FA Cup match against Lovells’s Athletic bemoaned “Those supporters who were deceived by the irresponsibility of the rumours spread regarding the composition of the Polish XI missed a treat and the “class” of our visitors gave the lie to the “touts” who spread the rumour that the team was being drawn from Polish “Bevin Boys” at Abercynon. If any of the Carpathians decide to live in the vicinity I am sure that our management would be pleased to offer them terms”

So who were The Carpathians Football Club?

The roots of this unique football team were of course sown in the midst of war and in the carve up of Poland by Nazi Germany and Soviet Russia in 1939.

Polish football is reported to have started in the city of Lwów for an exhibition match between the Sokól (gymnastic societies that promoted Polish nationalism) teams of the hosts and Kraków in 1894 and the Galician city soon became known for their football pedigree.

The two main clubs in the city were Pogoń and Czarni but they were being challenged in the thirties by a new club in the region Junak Drohobycz who, under the presidency of Polish Army colonel Mieczyslaw Młotek, had risen in three years from the C-Klasa to the play-offs for A-Klasa but the war stopped their progress and they had to disband without reaching their goal.

Football in Nazi controlled Poland was stopped but continued in clandestine leagues but in Upper Silesia its clubs were able to continue if the clubs declared themselves German and competed in a regional German league meanwhile in Eastern Poland the Soviet occupiers allowed football to continue but only for Soviet clubs, for example Dynamo Lvov and Spartak Lvov.

Many of the players in the Soviet zone ended up playing in Russia, former Wisła Kraków player Bolesław Habowski played in Moscow for both Dynamo and Spartak in 1940/41, he had been with Junak too. 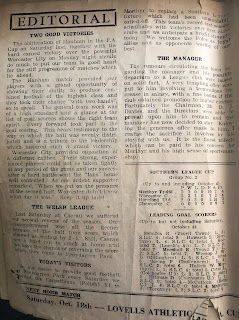 Many of those Junak players joined the “Szare Szeregi” (Grey Ranks) a regiment in the Polish Underground Army and also helped establish the “Biali Kurierzy” (White Couriers) which helped smuggle people into Hungary. Pretty soon the majority of those players where they joined a group of soldiers called the Carpathian Rifle Brigade who, as well as being a fighting unit, were keen to use any spare time to pursue other interests such as putting on shows and forming choirs. They also played football. The Junak players in the Brigade were encourage by Colonel Młotek to create a representative team to play friendly matches wherever they went. They played over 20 games as the brigade was deployed in Yogoslavia, Syria, Palestine and Egypt. As they also attracted players from other top Polish teams they were very good and won more than two-thirds of the games they played. Bolesław Habowski returned from his spell in Moscow to join his comrades too.

The Carpathian Brigade served with distinction in the Middle East and Italy alongside Allied soldiers. Before being sent to Britain in 1946 to be demobbed The Carpathians played some more matches against Italian opposition in Bologna, Lazio and Bari.

The demob process was very difficult for many Poles especially as much of the Eastern border had been given to the Soviet Union at the Yalta conference so players from Drohobycz and Lwów, for example, were now homeless. A lot of Poles decided to settle in the UK rather than return to a communist Poland. Over 114,000 Polish soldiers went through the Polish Resettlement Corps in 1947 despite opposition from unions and Ernest Bevin.

Bolesław Habowski settled in Buckinghamshire and continued to play for The Carpathians which continued to represent Poles in exile. They played a number of friendly matches against established English clubs and of course visited Merthyr Tydfil for that Saturday in October 1947.

So the team of Polish footballers that played on Penydarren Park that day were no ordinary team but an extension of Poland’s fight to survive despite the odds. The match day programme welcomed a team that “scintillates with victories over first class clubs” and most important of all they wanted to “welcome the Poles as loyal allies and as opponents worthy of our best”

The game itself was apparently a cracker with Merthyr winning 5-3 with goals by Stan Davies, Bill Hullett (2), Syd Howarth (penalty) and Bob McIlvenny. The Carpathians goals were scored by Slubowski, Jakubiec and of course Bolesław Habowski.

Unique opponents for the Martyrs, so soon after the war, for a match that deserves to be recognized as one of the best friendly games ever played at Penydarren Park.

We are indebted to the brilliant “From Partition to Solidarity the first 100 years of Polish football” by Ryan Hubbard for the majority of the info in this article.