Strikers - End of an era 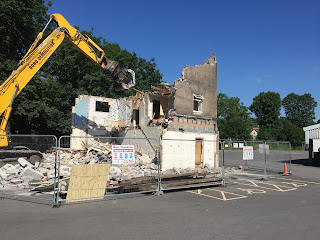 Amberleigh House has finally been demolished. It was an island of decay in our sea of revitalised commerce for a while but now the final remnants of that mythical pleasure palace Strikers have disappeared into history. Many of you will remember the place as the Jubilee Club, one of the first commercial avenues explored by the good burghers of Park Terrace back in the 70s. It was part of my youth, cans of Top Deck and bags of crisps after home games with my Dad who probably had an Allbright. The clubhouse was basic but it belonged to us and it was the Football Club, the darts teams have kept that moniker ever since those early days, after all it does what it says on the tin. This is about football. Pop and crisps post-match and if I was lucky then we’d still be there when the Football Echo was delivered which gave me a chance to analyse the day’s results and update the league tables for my Dad. It was a safe environment but in the old sense that everyone knew each other so the lads playing football in the car park or grass bank were part of the club’s extended family. It pretty much remained the same place until John Reddy appeared at the ground and started to modernise the whole place. The Jubilee Club was pretty much still stuck in the 70s so it was desperate for a face lift to attract new fans to the ground. So as the stadium changed so did the clubhouse and Strikers was born. I was never a big fan of the name to be honest but as everything does it become part of our language at MTFC and the place never looked back especially as it was renovated just as the glory teams of the late eighties and early nineties were on the pitch. Strikers seemed in a permanent state of flux with rooms being enlarged, décor changing and fountains appearing. It was still very much a football club though and before the advent of satellite TV it was the place to watch the big tournaments, I well remember watching the 1990 World Cup and the whole bar supporting Cameroon against England. Hulby trying to throw a chair through the TV when England took the lead still burns bright in the memory. Strikers was the perfect place at the perfect time for lads of our generation, it really became a crucible for ideas as the game changed after Hillsborough and the Italia ’90, this very fanzine having been born from a few drunken conversations in the Strikers beer garden in the summer of ’89. Strikers was the place to be in the 90s, the place was buzzing socially and of course the tills were ringing. There is an argument to say that the place was a little too successful as it attracted the usual suspects especially when JR stepped aside. Who can forget Eugene Caparos of course? I think it was him who was responsible for building the living space that became Amberleigh House, if not it was definitely him who broke the link for the ownership of the living quarters from the Football Club into private hands. How did that happen? Who profited? We will probably never know. To be truthful the building itself was always living on borrowed time. It was a timber framed building with a flat roof, I’ve heard that it was only considered a temporary structure and was expected to last no more than a decade or so, it was maintained for about 40 years eventually. The final years of course were problematic although we did have the most expensive carpet outside of a Las Vegas casino after the Walsall FA Cup match. The roof was in permanent need of repair and finally the chaos of the Holloway years put pay to the venue that had hosted so many of our weddings, you may even have met your partner during one of the infamous Friday nights in the hall, it was that kind of a place. It was and still remains a part of Merthyr Tydfil folklore, everyone has a story about the place, it was in every sense of the phrase an iconic building. It’s finally gone now and we have a few more parking spaces where people used to dance, socialise and generally celebrate Merthyr life. Will Webley’s be remembered so fondly in a few decades’ time? Maybe if we start to create an atmosphere that ensures that people want to make memories there. At the moment it’s like drinking in a doctors’ waiting room but slowly it’ll evolve into our place again and then the stories will flow and legends will be created. This is Merthyr Tydfil after all and we can do anything here.