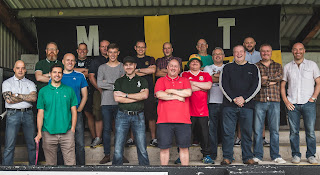 The Hospital Cup used to be a big deal in Merthyr Tydfil between the wars. I’m not really sure of the rationale behind the tournament or even the teams that competed but it was a fine trophy that Merthyr Town won on a few occasions. I got to thinking about this old competition during a recent weekend break in Cornwall where a few of the local clubs play in a pre-season charity tournament called the Brian Biggin Cup which last season raised over £1,000 for Help for Heroes. I watched Newquay win 5-1 at Perranporth’s ground in the competition which was well supported whilst the game itself was competitive.

So could we do the same in the Taff valley? A pre-season competition based on our artificial surface at Penydarren Park over the duration or perhaps a week in mid-July to raise money for Prince Charles Hospital. 8 teams; 2 groups of 4, culminating in a Final. As for clubs to join Merthyr Town, well the obvious ones would be Penydarren BC, Merthyr Saints, Aberfan SDC and Treharris Western but they could be supplemented by the Merthyr League champions and 2 guests, for example; Aberbargoed or AFC Llwydcoed.

Food for thought but first of all does anyone know where the Hospital Cup is now?