“All truly great thoughts are conceived while walking.” - Friedrich Nietzsche

With Wayne and Richard providing the support vehicles the crew pulled off as planned at 10.00pm, but at literally the very last second Nathan Jones turned up to add to the numbers. 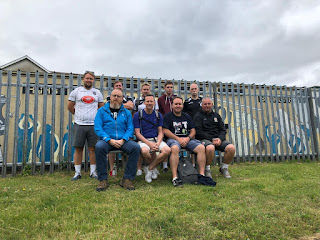 After a mini tour of the backstreets of Abercwmboi the convoy eventually arrived at the picturesque football ground, behind a row of terraced houses with Mynydd Aberdar looming in the background to the east. The last man to arrive was a hungover Nathan Evans following his appearance at The Zuton’s concert on Friday evening, as the obligatory team line up is photographed.

Unsure if it’s classed as uptown Mountain Ash or downtown Aberdare, as we approach the outskirts of the village the eagled eyed Mark Evans spots some nostalgia when we walk past a sign proclaiming ‘Park View Terrace’ that provides another photo opportunity.

Proceeding along Cardiff Road we shortly pass the turnstiles of Aberaman Park, the home of recently relegated Aberdare Town of the Welsh League, before arriving at the ultra modern clubhouse and facilities of Abercwmboi RFC.
We cross the busy A4059 to take a short cut past Aberdare Community School and the Michael Sobell Sports Centre where Wolvsey reminds the group that this is the original site of the ground where the Martyrs played against Aberdare Athletic in the Football League before tens of thousands of fans. Hard to imaging that type of local rivalry nowadays! 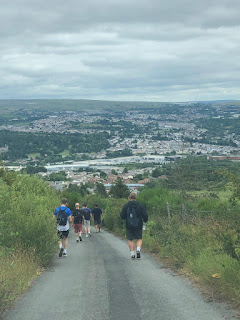 The first climb of the day starts up Abernant Road past the golf club (where Martin Howells is greenkeeper) and primary school before arriving at the first pit stop the Rhoswenallt Inn. A fine hostelry, recommended if you are in the vicinity, surrounded by highly desirable residential real estate. After impatiently waiting for the landlord to arrive, who apparently was stuck in traffic…….in Aberdare…….at 11:30…...on a Saturday morning!!, we depart after light refreshments were served.

We pass a solitary walker moving in the opposite direction on the climb of an old Drovers path with deep rutted terrain up Y Wenallt, until we eventually arrive at the summit of the ridge where the transmitter mast is located.

The curse of the moronic fly tipper greets the group as they start the pass high above Heolgerrig. At least this steep downhill section is covered in smooth tarmacadam on the Merthyr side making it much easier under feet to negotiate with glorious views of the town below.

Another brief pit stop outside the Chairman’s house as Lisa and the children are waiting with further alcoholic refreshments, before we conclude the 2019 edition of the sponsored walk down Georgetown Hill and up Vulcan Hill prior to the arrival at Penydarren Park.

Our group of intrepid walkers had covered the 7 miles in two hours to raise money for the Alzheimer's Society.