By D0n0van - May 23, 2020
A few of the Dial M lads headed off to Germany recently for the annual football weekender. Don’t worry, this isn’t one of those travelogues where we relay tales of drunken debauchery, to be honest we’re all a little too long in the tooth for that stuff, all too exhausting. Düsseldorf was our chosen destination for two reasons; firstly it was an easy flight option from Birmingham with Eurowings and most importantly it’s a central destination for a few Bundesliga teams in the Rhineland area. We were hoping for a few games over the weekend but the fixtures weren’t kind to us so we were left with just the one game but at least we didn’t have to travel far from our hotel to see Fortuna Düsseldorf v. Eintracht Frankfurt on a Saturday afternoon. 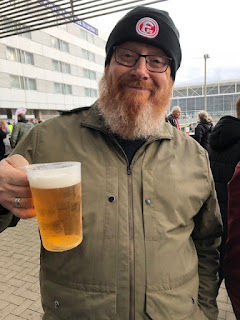 We got our first indication of the fan-friendly nature of German football when Moppy bought our match tickets via the very helpful Fortuna ticket office. A terrace ticket was only €13.00 each which amazingly makes it cheaper than watching the mighty Martyrs.
The Altstadt in Düsseldorf was our first destination for a few beers on the Friday evening and as soon as we arrived in the area and started a fantastic pub crawl it was obvious that Fortuna is an intrinsic part of life in this city; every bar in the Altstadt has some memorabilia celebrating the city’s football club. A club shop is conveniently placed near the Castle Tower and Rhine in the Altstadt to ensure that all the tourists get an opportunity to buy a Fortuna gift to take home. Düsseldorf is Fortuna and Fortuna is Düsseldorf. The F95 brand is everywhere. With a new recognizable and independent brand for Merthyr Town now available maybe it’s time we started to populate our town centre pubs, cafes and business too.
The Altstadt had more of an older customer base on that Friday than we were expecting but the next day was different as the place was rammed with football fans for both Fortuna and Eintracht mixing on the streets. Each bar had a covered outside area with heaters and at least a couple of TVs to keep the punters entertained as they drank the brilliant German beer on offer everywhere.
Moppy, as usual, knew where to go and we headed to the Uerige beer hall to meet one of his Northern Soul mates. The Uerige is a micro-brewery beer hall and it brews a typical dark Dusseldorf beer which is served in half-litre glasses by waiters who drop a fresh glass of beer on your table if your current glass is nearly empty. They’re rightly proud of their dark ale and only provide a local blonde beer in a bottle after a negotiation and as for soft drinks, well Moppy was told to “Fuck off to McDonalds if he wanted a Diet Coke!” The only record of the booze is a marked beer mat. It’s a dangerous system as we sat around talking without realizing the glasses piling up on the table. You need to place a beer mat over your current glass to stop the service and finally get the bill. Could we get a micro-brewery at Penydarren Park? Maybe one day? 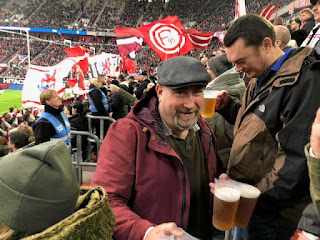 Match-day tram travel to the stadium is free in Germany with a match ticket. A fantastic way to ensure fans use public transport to reach the game. Maybe Transport for Wales could offer Merthyr Town season ticket holders free rail travel on match days.
Fortuna play at the new Arena which is out near the airport but every 5 minutes a tram arrived to unload fans of both teams. A quick check of the ticket and then into the stadium concourse where the day becomes quite familiar on a few levels.
Everyone is drinking beer. Everyone. There are mobile sellers ensuring that no one goes thirsty. There are plenty of food outlets available to help soak up the booze; pizza, fish, chips and pretzels. We searched for cob & chips to no avail. 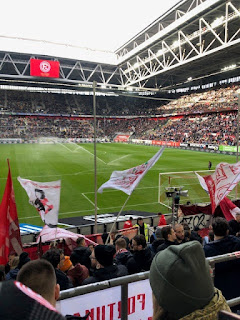 The match-day culture there is very much like the non-league environment here albeit on a much grander scale. Standing on a terrace with a beer in your hand watching your team. The service level at Fortuna is amazing though; Clive Layne is in charge of the beers but he’s back with a round of seven pints in no time at all as the outlets just keep the beer flowing to the fans. Again it’s not unlike getting served in Romans on a match-day.
The ultras culture in Germany is of course very different to our expectations on a matchday although the MTFContheTerraces group are trying to bring some atmosphere to Penydarren Park and away games.

We’re on the Süd Tribune with the Fortuna Ultras and it’s brilliant; a constant stream of songs, coupled with dozens of colourful home made flags, cigarettes, booze and laughter. It’s fucking excellent. There are 6,000 Eintracht fans opposite us, they’re bouncing around too but we can’t heard them over the din of the home fans. The Colin the Monk Stand can be lively of course and we can never expect to match a Bundesliga atmosphere but it’s more about a state of mind to just lose yourself in supporting your team.

The game ends 1-1 with Eintracht getting a last kick equalizer to deny Fortuna a deserved win in their fight to avoid relegation. Most crowds at professional clubs in the UK would now quickly exit the stadium but in Düsseldorf the fans are encouraged to stay. The bars are packed, the pretzel sellers are doing lots of business (we buy a few and they’re the best food for boozing) and the fans are standing around discussing the game with no grief from the stewards. Our bars are open after the matches in Merthyr of course so how do we change the habits of a lot of our fans to encourage them to enjoy a beer post-match? I’m not sure that pretzels will be the answer but I’d be happy to see them on sale.
The atmosphere on the trams back to the city is friendly with both sets of fans enjoying some daft Welsh fans singing Men of Harlech for the twenty-minute journey back to the Altstadt. Once again there’s plenty of beer being drunk. There had been a few sellers at the stadium tram station selling bottles of Bitburger from shopping trolleys to thirsty fans with no grief from police or stewards. There are big plastic bags on each platform to deposit the empty bottles and the fans fill them with no direction from anyone. Maybe a bit like the black bags on a MTFC Travel Bus.
Düsseldorf was brilliant and we are sure to return in the future for another dose of the unique Bundesliga atmosphere. There are plenty of similarities to our experience of non-league match-days with the relaxed attitude to booze on the terraces but there’s also plenty for us to learn to make visiting Penydarren Park more than just a football game.
Chairman Mao