V is for VVV Venlo by retired Sec


Well a pre Christmas trip to Holland was needed to ease those pre-Xmas blues caused by the meaning of life, and what’s the point the world is being messed up by thick people anyway led me to spend 4 days in Holland.  3 games were watched, starting with Ajax of Amsterdam as their song goes where I watched them lose their first league game of the season, and finishing at Rotterdam where I watched one of those boring nil nil draws. Sandwiched in between was the highlight of my trip, a visit to Venlo. 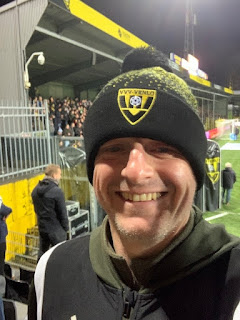 Now why Venlo I hear you ask?  Well in 1951 there were a series of matches played by British teams in the Festival of Britain against European teams, and on Saturday 19 May Merthyr lost 4-1 to Venlo.  So a trip was in order.
A pleasant train journey from Amsterdam to Venlo started off my day in style.  What a refreshing change to be able to buy a ticket which cost the same no matter when you bought it, and you could travel on any train.  What flexibility it gives paying customers.  I wonder if that will catch on in rip-off Britain?  Venlo was decorated with Christmas lights and decorations, and looked a pretty place.  I was struck with how clean it was, by the number of people who cycles, and as in other parts of Holland as well I did not see any homeless people on the streets.
There was a thriving Saturday afternoon market where you could buy an incredible array of goods.  I sampled some of the food, which was delightful.  I found a pub showing the Bournemouth Liverpool game before setting off to Stadion De Koel.  Now I had problems buying a ticket for this game through the official website.  It seems that due to fans from other clubs like Ajax buying tickets in the home end they have introduced a system where you verify your details using your Dutch bank account.  I did email the club but found them unhelpful, non-responsive even.  Now I knew Venlo rarely sell out so could have taken a chance and left it to the day, but that’s not something I can do I’m afraid.  So I did the think I hate, and bought a ticket off a tout at double the price.  When I got to the club shop though a rather helpful lady who served me updated my account to by-pass the ID check for future match purchases. 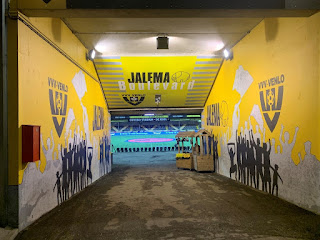 I bought some items in the shop, including a hoodie and shirt with the full club name Venlosche Voetbal Vereniging (Venlo Football Association), which is in some way linked with the legendary Mikan Jovanovic, on it.  Jovanovic has an interesting background.  Born in the former Yugoslavia he played for FK Crvenka a team based in what we now call Serbia.  He then moved to Holland and Venlo in 1973 and played for 8 years.  He took the country to his heart, and his now a Dutch citizen.
Venlo were struggling in the relegation zone, but they replaced the coach and they got the inevitable bounce and won 2-0 against FC Emmen.  Venlo’s stadium is in a bit of a bowl, with stands on different levels.  We have one level at the top, and then a lower level pitch side.  It made for an interesting atmosphere, with the sound in bottom of the bowl and what seemed like an echo from above.  Venlo also have a 3G pitch, which is not common in the Dutch Eredivisie but there were no complaints from the pros.  It was an even first half which saw Venlo take the lead, and in the 2nd half Venlo secured a 2-0 win against a Emmen team that finished with 10 men.  It was an enjoyable experience and one I am keen to repeat next season.  Venlo is definitely worth a visit for any fellow football geeks/nerds out there.