By Dr Obnoxious - July 12, 2017
The Chairman was 50 just after Christmas, so all the Dial M lads made a trip to Glasgow for his celebrations. I’d been before and the one thing that always sticks in my mind is their money. You know, you get there and spend the cash you take, then end up bringing back a ton of small notes in change or you visit the cash machine and over do the withdrawal just in case you need a seventh beer at the airport.

Countries with a strong identity have three stand out traits in my mind - self rule (we need this now), a strong language (we need this mandatory at schools) and some quality money. 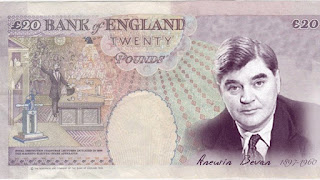 Let’s look at the notes of the realm we currently use, they are forgettable. The new fiver is horrible let’s be honest. It is shiny, cheap feeling, has a German unelected monarch on the front and a racist, war mongering bully on the reverse. The rest of the money we use is no better or any more appealing. Who are these people on our notes – Edward Elgar (he’s no Joseph Parry is he!), Charles Darwin (The Judith Chalmers of his time) and the soon to be Jane Austin and J M W Turner (seriously I have no idea who the next person on the back of the £20 is… Anyone??).

The Scots have the likes of Sir Alexander Fleming, Robbie Burns and Robert the Bruce on their notes. Proper heroes like. So it got me thinking of who we could have on our notes when the inevitable Welsh independence vote is passed.

Our historical figures should feature highly, the likes of Owain Glyndwr, the last Welshman to be the Prince of Wales and the man many of our countrymen still hold on to the hope/myth that he will one day return. We could also consider Llywelyn ap Gruffudd, the last sovereign Prince of Wales back in the 13th century. How cool would one of these be on a 20CC note (cyfred cymru).

Politics have been something that us Welsh have always excelled at. Aneurin Bevan the father of the NHS, probably the greatest ever Welshman surely deserves a place on a note. There has already been an unsuccessful online petition for him to appear on a £20 note. It’s a scandal that’s he’s not considered far more important in British society. David Lloyd George, Gwynfor Evans have both made significant contributions to life in Wales.

Entertainers often feature, the likes of Tom Jones, Mike Peters, John Cale and  Richard Burton would be great to see, but fancy having a fiver with the face of Tommy Cooper on the back. “Just like that”. Wouldn’t it be class?

We should also consider the merits of Michael D Jones, the founder of Patagonia, Merthyr designer Laura Ashley, infamous privateer Captain Henry Morgan or Richard Lewis - Dic Penderyn. What an apology that would be for the South Wales martyr.

Writers are always lauded (why I don’t know – this is easy, just bang one key and then hit one near it – easy mun)  - The poet Dylan Thomas, T.E.Lawrence, Hedd Wyn would all be worth of a pocket size portrait, but for me I’d like to see the amazingly talented Roald Dahl honoured. The books of the Llandaff born author have given such pleasure to countless generations of children all over the world.

Sports stars give such joy to the nation and we rightly make heroes of those who represent our nation on the world stage. The egg lovers would want the great Gareth Edwards to appear. There would be claims for the legendary boxer Jimmy Wilde to have his day in the sun, whilst Tani Grey Thompson and John Charles would also be worthy of a place. Me? I wouldn’t ever spend a tenner with Hal Robson Kanu emblazoned on it. They would be firmly tucked under my mattress. Imagine the joy of going to the bar with a note with HRK on the front and Fellaini, Meunier and Denayer on the other side, still queuing up for the hot dogs Hal sent them to get.